If you’re on Facebook, you’re familiar with . . . Throwback Thursday and Flashback Friday. Two days that some of us will post photos that are oldies but goodies of our former selves. Reliving the past can either bring a smile, a chuckle or “I can’t believe I did that” and . . . kept the photograph to prove it.

While looking through some old files I came across a shot that I always loved. We had only been married a few years, back in the 90s and took a road trip to the Calico Ghost Town. That would be the 1990s. 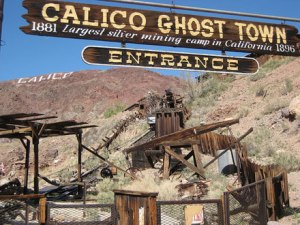 A little bit about this silver mining town:

Calico is an old West mining town that has been around since  1881 during the largest silver strike in California.  With its 500 mines, Calico produced over $20 million in silver ore over a 12-year span.  When silver lost its value in the mid-1890’s, Calico lost its population.  The miner’s packed up, loaded their mules and moved away abandoning the town that once gave them a good living.  It became a “ghost town.”

Walter Knott purchased Calico in the 1950’s architecturally restoring all but the five original buildings to look as they did in the 1880’s.Calico received State Historical Landmark 782 and in 2005 was proclaimed by then Governor Arnold Schwarzenegger to be California’s Silver Rush Ghost Town.

The day we visited was HOT and something I ate kept reminding me to never do that again. I really wanted to be a good sport and go on this silver mine adventure. There was a short entrance to the mine and a guide doing his best to educate and entertain us. He mentioned that once we entered the mine there was no turning back and you must exit at the other end.

Suddenly the walls began to close in on me, I felt it hard to breathe. I began to perspire. Did I mention I am claustrophobic? Very claustrophobic. I told my husband I was going back, he reminded me of what the guide said. At this point, it was be disobedient or leave my lunch in the tunnel. I turned tail and ran out into the God-given sunlight.

Today I began thinking about giving Monday a special day for Memories. This shot is not exactly Matt and Kitty, but we did our best. For some reason, there were no shoes for the saloon girls in this little studio set-up. 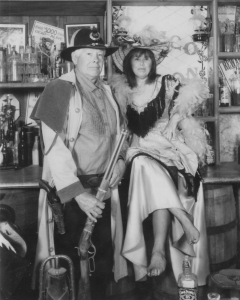 If you are a fan of Gunsmoke, enjoy a few clips from this famlous couple – Marshal Dillon and Miss Kitty.

On the first Tuesday of each month the San Diego Food Bank makes a huge delivery of produce to those in need. The drop off is at the Bread of Life Rescue Mission in Oceanside, CA. I grabbed my camera and took a few shots, some didn’t seem to mind, one woman yelled at me, “Please,lady don’t take my picture.” It was already too late, so I honored her request by cropping her out. The video is now on Youtube at:

The director of the mission, Steve Bassett informed the crowd I might be taking pictures for him. I tried not to be obvious as I meandered around the crowd. Bread products come from various stores and bakeries and are also handed out that day.

My screen saver runs through many of my pics and certain ones pop out and stay . . . change me.
Four years ago I was involved in a four day event featuring a Veterans Traveling Wall. Here’s the one that caught my eye as it slipped in for a few seconds and was gone.

One of my neighbors, a lovely young woman sent me a couple of cell pics to play with. Granted, one was ok, the other not so much. I asked her a few questions, where would she like to go, what are some of her favorite things. She said she wanted to hike above the clouds, walk on a black sand beach and travel Europe. She loves architecture and the Eiffel Tower is a favorite. One problem, she was in a dress and her significant other in a suit, well no hiking.
So, off to Paris to see the Eiffel tower and a side trip to Disneyland Paris.

The other pic she sent was one of her with that old rascal Pluto hanging off her shoulder in a restaurant.

Although not a cell, pic I couldn’t help attempting a redo on a very old pic of one of my Facebook friends when he and his wife were just little tykes. They loved it.

It was a gorgeous SoCal day and as we headed home a smokin’ hot Chevy rumbled in front of us. I had my camera in my lap and thought I might get a lucky shot. What do you think? Then I posted a video . . . 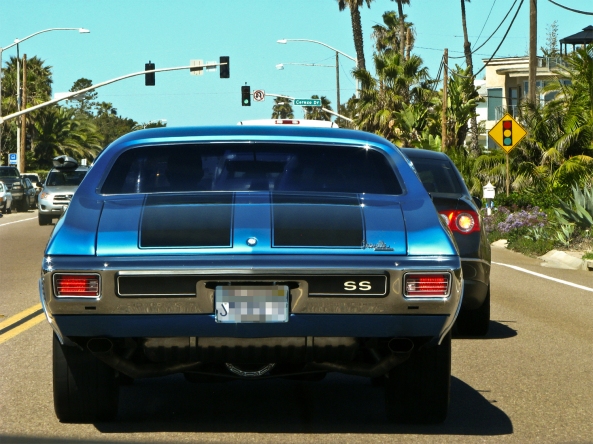 Last week we finally got what we had been dreaming of for months. Rain. Rain in torrents. Rain in tiny drops fluttering off the leaves. Rain coursing down our street and into our garages. Ahhhhh. Not enough to make a dent in the severe drought, but enough to encourage the flowers and newly budded trees.

Early this morning we were at the Agua Hedionda Lagoon with Max. The rain did cause the bank around the short trail to crumble in a number of places. Took a few pics of that erosion and the paddlers that were still training on Thursday mornings.

And now an oldie but goodie . . . http://youtu.be/kKdKzrLmXw4

Every Thursday, starting at 6:30AM, a large group of paddleboarders train at the Agua Hedionda Lagoon. Come April these racers will head back out into the Pacific for competition. I was never there early enough to see the start, but they can move once the pistol goes off – or the instruction yells. They make two trips from lands-end to the freeway bridge and back. Quite a site, I only wish I could have been closer as they are some distance from the beach once they start.

With all the rain we finally had, it won’t be safe to go back into the lagoon this week. This might deter them, as once in awhile someone will get very wet. 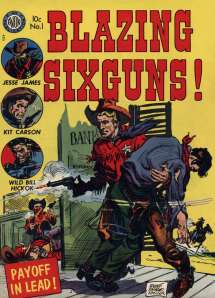 Six-guns a blazing . . . hip level . . . desperadoes gone to meet their maker. That and straight talk was all I knew about the term, shoot from the hip. Until I read an article about shooting from the hip photography. Mostly used for street images, I was curious. It sounded simple, click away without getting in someone’s face or space.

Did it matter how tall you were, or if your hips were narrow or tractor trailer wide or you were hipless? Is it really a hip or waist shot? What about shutter speed, B&W or color. If you are a pro at this, send some tips. Youtube and the web have a number of articles and videos – here’s a short clip.

I’m not good at judging distance, some shots were all sky and others, well not anything to write about. Just three shots from yesterday on a trail walk. I like this one the best. We were sitting on a bench just above the trail, great place to survey the opportunities.

All ages come her to enjoy the lagoon and wide trail. 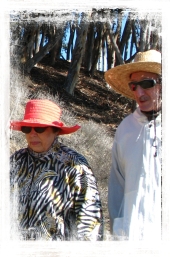 Runners with dogs are a familiar sight. 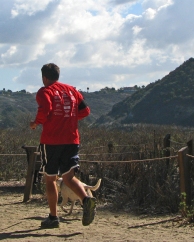 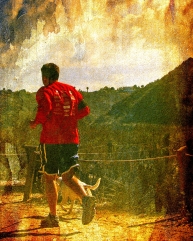 Let me begin this tale by saying that people tell me things. All kinds of things. Strangers seem quick to respond to an off-hand comment or a simple smile in the check-out line.

They feel the need to talk to me. I listen, and listen some more and may interject a question or comment. The conversations can be brief or go on for ten minutes. Such was the case today.

It was shop for essentials at ‘WalMart Day’. Laundry soap, wax paper, etc. Toss in a few tomatoes and avocados and . . . a fireplace lighter. It’s not unusual to see the same individual a number of times as I perused the aisles trying to stick to my handwritten list. While I was heading to the area where the lighters are usually displayed, I overheard a store employee in the next aisle giving directions. I moved closer and asked about the lighter.  They were right there, almost in front of me—far from the usual spot. 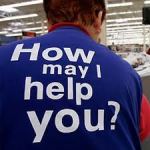 A young man looked up at me and said he was trying to find a hand-crank meat grinder, he told me the employee said they had them. Thus began the pig’s tale. 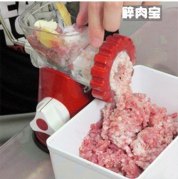 “I’m going to make empanadas,” said the man with a genuine smile and a bit of an accent. “See, I bought a pork butt and have to grind it up.”

“That sounds good,” I replied.

“I only made them once, about three years ago – I saw Emeril Lagasse make them . . . I‘ll show you,” he said as he pulled out his iPhone and starting scrolling through. He sighed, “My kids said I need to get up-to date, I really don’t like this phone, the

screen is too small. Ah, these are my children, my son and my daughter.” More scrolling. “There, you see?” A large platter of empanadas appeared.

I asked him if he was Filipino, he reminded me of our neighbor down stairs, so polite and friendly. Again—that warm smile, “Yes, and I love to cook.”

I listened a bit more and that’s when he pulled a large, plastic-wrapped package out of his cart. It made no sense at first. Then he turned it over and I saw . . . the SNOUT! 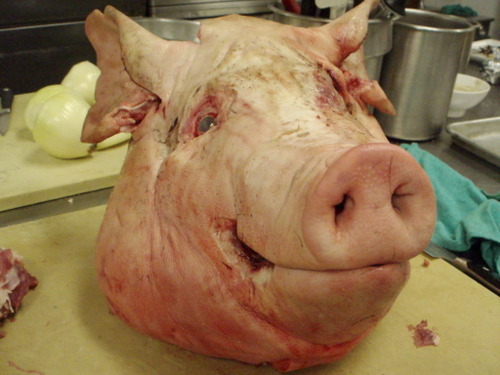 A pig’s head stared up at me with beady eyes that once searched for stray kernels.

Limp ears that would no longer wiggle and a mouth with something of a grim smile.

I asked if what he was going to do with the head – he told me how he would marinate it with herbs and who knows what else. An apple it it’s mouth, maybe.

There are many places in the world, butcher shops, and specialty shops where one might purchase a pig’s head. But, never in my wildest dreams did I ever think I would see the head of a pig in a WalMart cart. I was astonished to say the least.

I soon wished him a Happy New Year and he returned the sentiment. As I write about this now the thought occurred to me that this little scenario would have made a humorous ‘Candid Camera’ stunt.

Waiting for some thunder and lighting, one storm down, one to go. 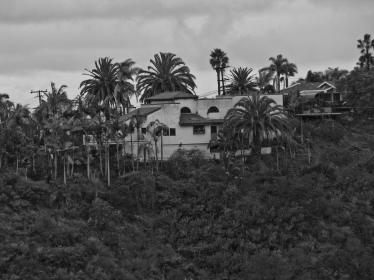 Somethings change others not so much

Not for the birds